Enter your City name or Pincode

The headquarters of the Honavar Taluk in the Uttara Kannada district of Karnataka, Honavar is a port town of commercial and strategic importance in south India. Covering a total ground area of nearly 10 square kilometres and housing a number of tourist attractions, Honavar has grown in importance in the recent days.

Facts at a glance

Being a port city, Honavar has found mention in a number of ancient texts produced in India. It was as early as in the 10th century that the Jain Ramayana mentioned the existence of a town by the name of Hanuruha Island, in the region which is presently known as Honavar. Besides, a number of noted foreign travellers and geographers like Ibn Batuta and Abu al-Fida have also left accounts of this town, which they saw during their visits to the courts of the various rulers in medieval India. Even during the times of Marco Polo, the town is said to have played a crucial role in this part OF India. The importance of the town increased manifold with the advent of the British in India – who were quick to realise the trade potential that lay unearthed here, and hence used it as an important seaport to conduct its trade and commerce in the southern parts of the country.

Honavar is situated midway between Mangalore and Panaji and has one of the most important seaports in the state of Karnataka in India. With the Arabian Sea in the West and the Sharavati River in the south, the town is under the soothing influence of ocean currents which temper t extremities in weather conditions, thereby making the weather conducive to human health throughout the year.

Art and Culture of Hanovar

The town is home to a richly diversified population which consists of the Konkanis, the Tuluvas and the Kodavas. Besides the local population, one is also likely to find Tibetan Buddhists in the mix here.
In keeping with the diversity of the population residing here, a number of festivals are celebrated throughout the year. Ugadi, Ganesh Chaturthi, Basava Jayanthi and Nagapanchami are popular festivals which are celebrated in Honavar as well as the rest of south India. Besides, Diwali and Ramzan are also celebrated here.

Rice, Sorghum and Ragi form the staple food in this part of the state of Karnataka. Besides, Joladda Roti, Uppittu and Masala Dosa are analogous to the snacks available in North India. Being a part of coastal Karnataka, Honavar is specially known for the Udupi cuisine, the main constituents of which are grains, vegetables, beans and fruits. 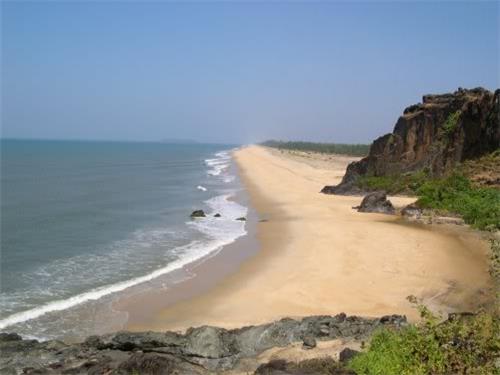 River Sharavati
The river provides the principal medium of waterways transport in and around Honnavar and is considered to be one of the most famous tourist spots in Karnataka. Honavar has become a chief tourist spot primarily because of the fact that the river meets the Arabian Sea somewhere within the precincts of the town, and in the process gives rise to picturesque islands in the vicinity. The estuaries formed by the river are also beautiful to watch.

Kasarkod Beach
This is a 5 kilometres long sandy beach, located 2 kilometres from Honavar. The scenic beauty of this place has mesmerised numerous tourists over the years, and is thus an attractive destination for the wanderlusts in the town.

Venkatarama Temple
The temple becomes a tourist hotspot during the annual Rath Yatra festival that is held here during Ramnavami. The event is a great crowd puller and people from surrounding towns, cities and villages make their way into the temple premises on this occasion.

Basavaraja Durga
This is a fortified area, of historic interest, located at a distance of 3 kilometres from the point where the Sharavati River meets the Arabian Sea. The fort was built during the times of the Vijayanagar Empire in south India and was of strategic importance to the defense of the town. However, towards the end of the 17th century, the fort came under the possession of the Keladi rulers who subsequently renamed it as Basavarajadurga, in memory of Basavaraja who was a famous Keladi prince.

How to reach Honavar

By Rail
The nearest railway station is at Karki, which is situated nearly 5 kilometres away from Honavar. The Konkan Railway line connects Karki to the various important town and cities in the country.

By Road
One can avail the national highways connecting Karnataka with the other parts of the country, or the state highways if traveling from somewhere within the state.

By Inland Waterways
Inland Water Transportation (or River Transportation) is one of the principal modes of transport used in the regions surrounding the town. There exists a direct waterways link between Gerusoppa and Honavar along the coast of the Sharavati river, which is managed by the state government.

By Air
Mangalore International Airport serves as the nearest airport for Honavar.

Comments / Discussion Board - About Honavar